THE IDEA OF INDIA

WELCOME TO MY THOUGHTS, RESEARCH AND IDEAS WHICH ATTEMPT TO DEMYSTIFY THE INDIAN ENIGMA

Posted by Abusaleh at 5:27 PM No comments:

Posted by Abusaleh at 5:24 PM No comments:

Posted by Abusaleh at 5:20 PM No comments:

Status Report on Social, Economic and Educational Conditions of the Indian Muslims

Just completed directing a major research programme on behalf of the Indian Prime Minister to assess and prepare a status report on Social, Economic and Educational Conditions of the Indian Muslims. The report is based on data analysis of many sources including the NSSO, the Census, data supplied by the state governments, public sector industries, reserve bank of India and the private sector. Qualitative data collected through state visits has an added dimension to the report. The report was formally handed over to the Prime Minister of India on November 17, 2006; and the report is now in print.

Posted by Abusaleh at 4:49 PM No comments:

Aspects of Health Care Financing and Insurance for India

An empirical study which presents the morbidity rates, health care utilization and health expenditures for India and major states. September 1995. (Being published in a volume edited by Praveen Visaria and A. Vaidyanathan)

`Measurement of Inputs and the Impact of the FPP and Maternal and Child Health Program in Gujarat, India'

`Causes and Mechanisms of Fertility Decline in Karnataka', 1980-85

Posted by Abusaleh at 4:35 PM No comments:


Alternative Definitions of Poverty in India

Poverty Round Table Discussion once a month during 2001-02.

In this programme, collaborative research has been launched by networking 14 national level consultants / institutions and 7 international academics / institutions on a number of issues pertaining to human deprivation in India. The focus of this research has been to empirically establish the importance of analytical research in setting the poverty alleviation strategies including conceptualizing and designing the social and economic safety net programs. Noteworthy national institutions networked are the Institute of Economic Growth, Jawaharlal Nehru University, National Institute of Nutrition, Allahabad University, Indian Institute of Technology, Chennai, Institute of Development Research, Ahmedabad, Institute for Social and Economic Change, Bangalore, National Institute of Public Finance and Policy and so on. A few international institutions with whom joint research was pursued were the Harvard Institute of International Development of the Harvard University, Economics, Departments of Stanford University, USA and Oxford University, Oxford, The UK, Cambridge University, The UK and many others. An international seminar on Human Development was organized in New Delhi in which 21 commissioned and collaborative papers were discussed. Dr. Nicholas Stern, the Chief Economist and Vice President of the World Bank inaugurated the seminar and Dr. Bimal Jalan,. Governor, Reserve Bank of India graced the occasion. The others who spoke ware Ms Brenda Mc Sweeney, Resident representative of the United Nations and Dr. N. Saxena, Secretary of the National Planning Commission. The proceedings of this seminar are now in press by Orient Longman Publishers.

A large project funded by UNDP, UNICEF, UNFPA and IDRC and executed by NCAER on behalf of the Planning Commission, Government of India. A report based on the primary data from 33,000 households across all parts of India has been finalized. The Oxford University Press has now published this report entitled INDIA Human Development Report.

Sixteen State level reports based on both the review of secondary and the HDI primary data and are in the process of finalization for publications a series of State Human Development Reports.

Twenty-six village studies are being edited for publication.
Human Development Indicators for the Scheduled Castes and Scheduled Tribes in India.

Posted by Abusaleh at 4:32 PM No comments:

Status Report on Social, Economic and Educational Conditions of the Indian Muslims

A Profile of Indian States in the 1990s

"The India: Human Development Report is the first study to take stock of the major indicators of human 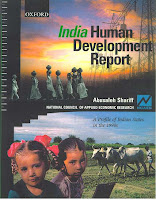 development in the Indian context and link data with people belonging to different population groups within the country. The report provides:
A comprehensive compilation of economic and social development data: Based on a primary survey of 33,000 households located in fifteen major Indian states, and the north-eastern region, the report covers:
Levels of living, employment and wages; Literacy and education; Morbidity, disability and nutrition; Effectiveness of public services and health; Demographic characteristics; and Village-level infrastructure and development.

Estimates of over 100 indicators: A number of indicators have been generated such that each can provide a complete information set for targeting and programme implementation.

A detailed statistical appendix: The database will be instrumental in generating investigative and analytical writing on development in India."

Sixteen State level reports based on both the review of secondary and the HDI primary data and are in the process of finalization for publications a series of State Human Development Reports. 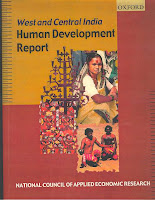 This volume focusing on west and central India comes as a sequel to the India HDR and the South India HDR. It is a comprehensive and authoritative source of micro-level information on economic and social development in the states of Maharashtra, Gujarat, Rajasthan and Madhya Pradesh over the last quarter of a century. This includes disaggregated data collected from the newly-created state of Chhattisgarh.

Based on qualitative survey of 11,188 households spread over 562 villages from 63 districts across these states, the report provides:

This volume will facilities effective region-specific and group-specific policy formulation at the grassroots. Rich in statistical analyses of various facets of devdlopment, it is a valuable resource for government, policy-makers, academia, and those in the development sector. 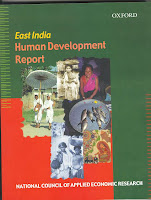 The South India: Human Development Report is a comprehensive and

Based on qualitative survey of 8036 households spread over 399 villages from 43 districts across these states, the report provides:

This volume will facilities effective region-specific and group-specific policy formulation at the grassroots. Rich in statistical analyses of various facets of devdlopment, it is a valuable resource for government, policy-makers, academia, and those in the development sector.

Posted by Abusaleh at 4:37 PM No comments:

Posted by Abusaleh at 4:35 PM No comments: 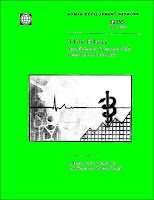 Some Options for Private and Public Health Care in Urban India
jointly with David C. Naylor, Prabhat Jha and John Woods, The World Bank, Washington DC, 1999, pp I – ix and 1-38.

Health systems around the world are currently confronted with question of how public policy can engage the private sector to promote efficient and health care delivery. In India, the private sector
absorbs 80 percent of total health care expenditures. The share of private health care spending far exceeds that in most Western countries, and is also well above the worldwide average for low-income countries. Most of this private expenditure currently occurs on an out-of-pocket basis, suggesting a substantial opportunity to reshape the configuration of Indian health care through innovations in prepayment of services. At the same time, India's urban population is steadily increasing and faces both communicable and chronic diseases. This dual disease burden has created a need for both the private and public sectors to better organize health services in India's rapidly grow ing cities.
In this report, the authors examine India's policy options for improving the private-public mix for urban sustainable health care. Its timing is propitious. The Government of India (GOI) has begun to consider new policies in health care finance, in light of ongoing concern about the organization of health services in India's burgeoning urban areas. This paper was designed as a statement by the authors, rather than a formal Government of India-World Bank report, a deliberate approach that fully enables the authors to provoke a thoughtful debate. The GOI has requested the World Bank to further assist it in examining options for developing private-public part nerships for health service delivery This report should help to inform that process and catalyze more definitive assessments of some policy options. More generally, this report is also an important contribution to the ongoing debate over how to optimize the quality efficiency, and equity of India's urban health care services.

Posted by Abusaleh at 4:29 PM No comments:

Background papers and maps for a National Consultation on Nutritional Security and the Prevention, Treatment and Mitigation of TB and HIV/AIDS in India, organized by World Food Programme, New Delhi, December 2-3, 2004.
Posted by Abusaleh at 4:26 PM No comments:

Papers presented in Seminars and Conferences

Other Papers Presented in Conferences and Seminars

Posted by Abusaleh at 4:04 PM No comments:

Posted by Abusaleh at 3:43 PM No comments:

Abusaleh
Abusaleh Shariff is Chief Scholar at the US-India Policy Institute, Washington DC (since 2012) and President, Centre for Research and Debates in Development Policy, New Delhi (www.crddp.in). He Was a Chief Economist at the National Council of Applied Economic Research, New Delhi (1994- 2012). He also worked as Senior Research Fellow at the. Food Policy Research Institute, Washington D C 2008 -10. He was advisor (under a committee setting) to the Indian Prime Minister during 2004-6 and the Ministry of Home Affairs, Government of India during 2010-11 in the areas of inter-state relations and inclusive development policy reforms. Was on teaching assignments at various levels between 1973 to 1994. Was on teaching assignments at various levels between 1973 to 1994. He was nominated to the 13th (Indian) Finance Commission by the Finance Ministry, Government of India.